Jairek Robbins
What The World Needs More Of.... Tune in (25:59)
0.75x
1x
1.25x
1.5x
2x
0:00
25:59
Apple PodcastsGoogle PodcastsPlayer EmbedShare Leave a ReviewListen in a New WindowDownloadSoundCloudStitcherSubscribe on AndroidSubscribe via RSSSpotify 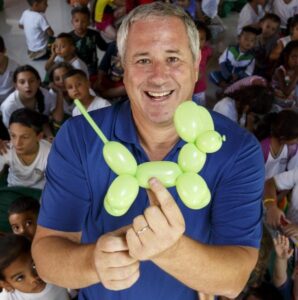 Bio: Andrew Stein founded the Orphaned Starfish Foundation in 2001 to help orphans, victims of abuse and at-risk children worldwide escape their cycles of poverty and abuse through education and job training. From humble beginnings building a small computer vocational training center in an orphanage for young victims of abuse in Santiago, Chile, he has built the Foundation to now serve over 13,000 children in 60 programs in 27 countries: Argentina, Mexico, Costa Rica, Panama, Peru, Honduras, Bolivia, Chile, Brazil, Nicaragua, Dominican Republic, Guatemala, Ecuador, Haiti, Cambodia, Colombia, Ethiopia, Paraguay, Puerto Rico, El Salvador, Uruguay, American Samoa & Nepal. Andy has partnered with local partners in each of these countries, including Save the Children, Rotary Club, and USAID. “Tio Andy! Tio Mago!” Andy makes yearly visits to each Orphaned Starfish program. Mago is Spanish for Magician. He brings a magic show complete with balloon animals for all the children. (His highest amount recorded was 1,000 balloon animals in one sitting.) His visits also allow for a personal connection not only to the children but to the institutions and their directors and teachers. Every visit helps OSF learn what is needed at our programs so we may better serve these children. Every trip also allows for new program scouting. For his work helping the children of the favelas of Brazil, Andy was awarded an Honorary Citizenship in Rio De Janeiro by their Congress. In the United States, he has also been awarded the Jefferson Award for Community Service, the key to the city of Miami Beach, NJ Islanders Hometown Hero, Commack High School Alumni of the Year, and several other state and local honors. He and the Orphaned Starfish Foundation have been featured on CNN, CNN en Espanol, Forbes, CBS News, Fox News, ABC News, Telemundo, and Univision as well as in the Wall Street Journal, Miami Herald, Star-Ledger, Jewish Week and US Magazine. Prior to his work with Orphaned Starfish, Andy was active in Special Olympics, Rotary Club, and Counterpart International. Andy Stein is a recovering banker having worked in banking for nearly 25 years. He was President and CEO of Makopastreet Partners, LLC. Makopastreet Partners provides senior debt financing for luxury and ultra-luxury hotel, and mixed-use developments, as well as infrastructure projects worldwide. Andy has been a featured speaker at several industry conferences worldwide and was a guest professor on the topic of international hotel finance at Wharton for the past several years. Andy was a Senior Vice President at a large German Bank, running their Hospitality Division and, prior to that was a Vice President at Chase and its predecessor institutions focussing on Infrastructure and Project Finance. From 1993 – 1996, Andy was based in Manila, the Philippines as the Joint Head of Corporate Finance for Chase’s (formerly Chemical Bank’s) Manila Branch. During his tenure in Manila, Andy developed the Bank’s project finance and hospitality expertise in the Philippines. Andy also was instrumental in the execution of the Brady Plan bonds, which restructured the bank debt of several Latin American and Asian countries. Andy holds a B.A. in Economics and International Relations from the University of Virginia. Andy is married to Dilia Stein and has two sons, all very much involved with Orphaned Starfish Foundation. Andy lives in New York City when not traveling for the Foundation.

The World Needs More Of:

1. Caring for Others: People willing to give an opportunity to those most in need of it.

2. Love, Laughter and, of course, Magic

Wow Factor: My WOW factor is that I left a successful career in banking to spend my life dedicated to helping orphans, victims of abuse, survivors of trafficking, indigenous children and at-risk youth break their cycles of abuse and poverty. Over 18 years ago, I was one of the top fliers for Continental Airlines for all my business travel. I told each bank country manager that in order for me to get on another plane and pitch business, they had to find me an orphanage and time in the schedule to play with those kids, make balloon animals and help them with their work and homework. 18 years ago, in one such orphanage in Chile, the nuns told me that when each girl reached the age of adulthood, they had to leave the orphanage and each girl that left would become a prostitute or live on the streets. I started the Orphaned Starfish Foundation to help these girls, building a state of the art computer center in their orphanage, and it was magic. Six months later the younger girls were the head of their classes, the older girls learned computer skills, and, since we started, only one girl went to the streets, and all others got into university or got jobs.