Jairek Robbins
What The World Needs More Of.... Tune in (27:30)
0.75x
1x
1.25x
1.5x
2x
0:00
27:30
Apple PodcastsGoogle PodcastsPlayer EmbedShare Leave a ReviewListen in a New WindowDownloadSoundCloudStitcherSubscribe on AndroidSubscribe via RSSSpotify 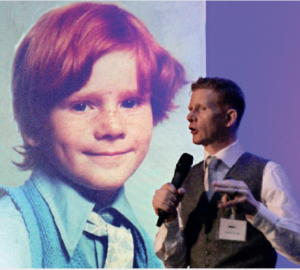 Bio: Richard McCann is a Sunday Times No1 Bestselling author. His first book, ‘Just a Boy’, sold close to ½ million copies and has been translated around the world. He’s a Motivational Speaker who overcame an almighty fear of speaking to having now spoken 2500 times across the globe as far and wide as Malaysia, South Africa, Iran, Switzerland, Canada and many more. He’s also a Presentation Skills Coach. He has been the subject of two BBC documentaries about his extraordinary life story. Brought up on the ‘At Risk’ register until his mother was murdered by the serial killer Peter Sutcliffe (The Yorkshire Ripper), Richard went on a downward spiral. Foster homes, children’s home and then a violent upbringing by his estranged father took away any self-esteem that he had. He left school with no qualifications and was kicked out of the army for psychological reasons before he turned to drugs to ease his depression. After a prison sentence for a drugs offense, and with his home about to be possessed, Richard hit rock bottom where he considered taking his life. It was at this point that he found the gut-wrenching determination to turn his life around and fight for a better future. That turn around has been remarkable. Now married with a family of his own, three books about his life being published, and a much sought after inspirational speaker. His presentation centers on the way in which he has turned, what can only be described as insurmountable odds, to his favor and has shaped a more positive life for himself. It’s one that most people don’t forget in a hurry.

The World Needs More: I believe the world needs more kindness and compassion and understanding that we are one world and one human race. It’s not what I speak on ordinarily.

Wow Factor: My WOW factor for many is that fact that I overcame what for many would send them under. The murder of my mother when I was a five-year-old boy. Losing mum and a number of other setbacks along the way have in fact shaped the person I am today. Putting that to one side for a moment, one of the moments that have shaped what I do now, being a speaker, was taking part in the public speaking competition at school, at the age of 12, which I won. It took incredible courage to get on stage with no confidence and low self-esteem. When I first started speaking professionally in 2005, I was a terrible speaker. So I went out there and studied great speakers including Tony Robbins. I modeled what those speakers did and, well, the rest is history.